Oops im so rubbish at blogging

Right your be pleased to know im going to stop being rubbish at updating this blog, ive had a few issues with the computer but hopefully it will be sorted now.

The season has started and its got off to a perfect start, Zippy has placed at every show so far gaining a 1st, 2nd, 3rd and 2x 6th places, we still have mega issues with start line waits which is obviously having a negative impact on our rounds at times, still I know its a training issues so I best get it sorted.

Ronny and Keisha are only entered in jumping classes this year, well apart from the odd agility class for Ronny, he is still yet to do a Champ class so ive entered him in a couple just so its a box ticked before he retires :) Ronny is still loving his agility and too has had some brilliant runs gaining a 1st, 2nd and a 3rd.

Training has being going great with Rumble, we have just started his running contacts training, I will post a video once we get up and running a bit further on down the line, there is a video below of Rumble working on his tight turns, they are also coming along nicely, he is keen to work so that's the main thing :-)

Anyway I will be updating soon with more stuff so check back soon.

What fun we have had over the last 4 weeks, Rumble has settled in really well, I have also got used to him being so small and I think even the dogs know when he is stood underneath them :) 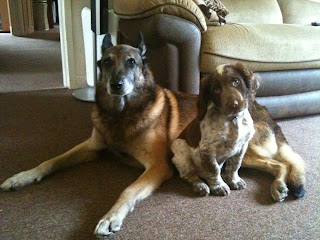 We have started puppy class, the first week he was brilliant but last week he was a monster and did very little of what I asked, it's amazing how much we take for granted from our big dogs being so well behaved.
Trick training is coming on very nicely, not only is Rumble learning tricks Zippy is joining in the fun too, I will try and get a little video of them soon.

This Saturday we are off to Barking Mad Agility Show, I haven't done winter shows for some years but seems as ive got a little one to socialise now I best make the effort, im sure the big boys wont mind !!!! 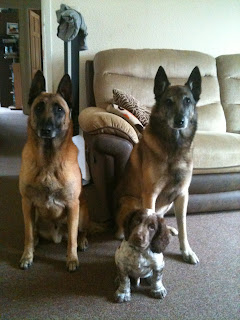 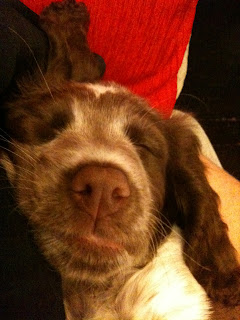 So that's it the summer season has finished for us, unfortunately Chippenham Show got cancelled so no Champ for Ronny and Zippy but hopefully we will have a good winters training and come out fighting fit for next year.

So now it's training mode, we are currently doing very little but will start training again this week, although we haven't been doing anything for the last month or so we have been very busy at home. 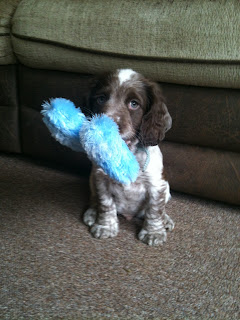 Meet Rumble, my new puppy a Sprocker (springer x cocker). He is currently 9.5 weeks old and has settled in very well. I decided to get a different breed as I didn't want to have the same breed all my dog life, I know many of your responses have been of shock as you all thought I was going to get another Malinois but that would have been very boring !!!!
So I had been looking for sometime to get a smaller dog, im conscious Ronny is coming to the end of his agility career and with Keisha already semi retired it will only really leave Zippy in action, It's going to take sometime before Rumble gets on the agility scene so definitely the right time for a new puppy.
So a new challenge indeed, initially im finding it quite hard not to step on him, he is so small :-) I already know ive got a steep learning curve coming my way, he is so confident. I wanted a busy and robust dog that will be able to keep up with my Mali's but something that was smaller in size, he should be perfect :-)
1 comment: 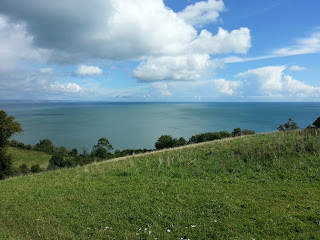 Back from our lovely holiday in Devon, we had some fantastic weather. The boys had a great time visiting the beach everyday and going on some brilliant coastal walks, I think in total we managed to visit 5 different beaches. Rich and me also had a fantastic time, lots of eating and drinking and an odd game of crazy golf or Go Ape kept us entertained. I think a week was just about right, the boys are shattered and have slept solidly since we have been back. In Fact i'm quite tired too with all that walking :-) 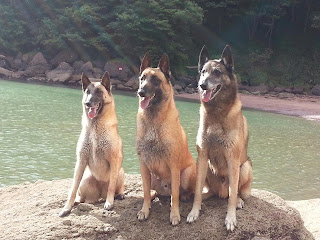 So this weekend is our last summer show of the season, we are off to Chippenham for the Champ, i've got both Ronny and Zippy entered so i'm really looking forward to it, the weather this week is not looking good so i'm just hoping the ground holds up, it will be a shame if we don't get to go camping on our last weekend.
This winter we have planned to keep busy with entering one show a month, i'm also judging in December and January so lots to look forward too.
There is a possibility of a small project that will keep me busy over the winter months too ;-)

Yet again ive been rubbish at updating this blog, oops !!!! So a quick catch up with what's been happening over the last month or so ......

We went to Tag Show mid August, I had entered a class called tunnel exchange so just assumed it was a class with lots of tunnels, perfect for Ronny and Zip, its only when I walked the class along with many others that it suddenly dawned on us that infact it was a class for one dog and two handlers and to exchange the running of the dog at the tunnel, oops I must read the schedule properly in future. Anyway, Rich was put under pressure, never having run a dog or actually done any agility whatsoever I managed to convince him to run Ronny and Zippy with me, I recipe for disaster possibly but it would be very entertaining .......

We ran Ronny first, Rich ran the first part and actually got Ronny round clear (amazing) I then took over to run him home, we actually went clear and finished 3rd !!! (must be beginners luck) ;-)
Zippy ran after but unfortunately he took a pole for Rich and one for me but he was a very good boy.

Ronny has been flying over the last few weeks, many top 5 placings in Grade 7 which im chuffed about, he has even got enough points for his agility warrant Gold now !!! Not quite finished his first agility book but only a few lines to go :-)

Zippy has been zooming along quite nicely, placing lots and he is looking so confident in him self, I do love running him and both Zip and Ronny are entered into the Champ at Chippenham in October.

We are off to Devon this weekend, initially going to a show but staying on for a weeks holiday after to hopefully enjoy some Rich and Doggie time, lots of plans to visit the beach and go on nice walks, maybe even a bit of crazy golf (without the dogs though otherwise they would just keep retrieving the ball).

Only two shows left before the season is finished then I guess we will have a nice rest and start hitting winter training in November, might be something on the arisen to keep me busy this winter too !!!!! ;-)
No comments:
Older Posts Home
Subscribe to: Posts (Atom) Welcome to my dogblog, my name is Jo and I currently own three malinois, Ronny, Keisha and Zippy.

I will be updating my blog on a regular basis and will keep you posted on any news, photo's or results.

If you want to contact me my email address is :-